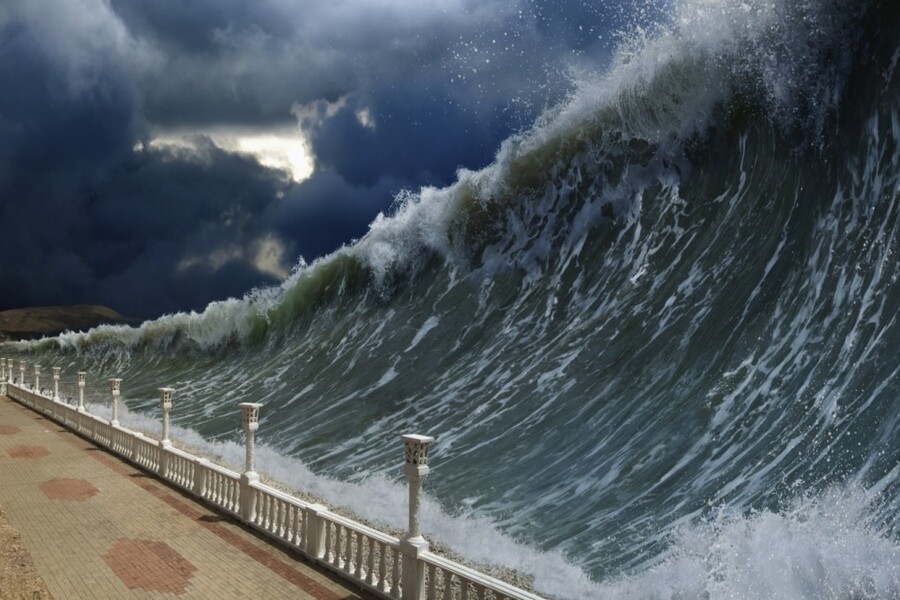 Tsunamis are the series of giant waves caused by the displacement of a large volume of water that can be caused by any number of events, including earthquakes, underwater explosions, landslides or even meteorite impacts. But the tsunami waves do not dramatically increase in height because of the movement .The waves can reach up to ten meters in height before they hit the land .When the waves travel inland, they build up to higher heights with the depth of the ocean decreases. The speed of the waves depends on the depth rather than the distance from the source of the wave. Tsunami waves have speed like jet planes, and it only slows down when it reaches the shallow waters. Tsunamis are one of the most catastrophic natural events that the world experiences.

Few coastal regions around the globe like Pacific Ocean like Chile and Peru, West Coast USA, Japan, and New Zealand are generally highly prone to tsunami. The after effects of tsunami are devastating and it is very necessary to warn people before tsunami in order to save human lives and resources. Initial tsunami warnings are usually based only on seismic information that detects the earthquake’s location and magnitude. Information from coastal sea-level gauges and offshore buoy stations confirms the existence or absence of a tsunami.

There are two distinct types of early tsunami warning systems:

Early tsunami warning systems starts with seismic monitoring. Sensors on the seafloor monitor for seismic activity caused by earthquakes and volcanoes. If any substantial seismic incident occurs, surface buoy sensors then monitor the changes in the sea level. Tsunami waves could be as shallow as three feet high, so these sensors are placed in an array to determine motion as well as height. These seafloor and surface buoy sensors send data to tsunami warning centers, which are staffed 24/7. The centers monitor the data, after performing analysis, it quickly determines whether conditions and issues a tsunami warning alert. If an alert is sent, it goes to local radio and television, wireless emergency alerts. Some tsunami threat areas might also issue warnings through sirens, text message alerts, and phone notifications.

Mostly Early tsunami warning warnings are based on rapid detection and characterization of seismic activity. Due to the fundamental differences in nature between the solid earth in which an earthquake takes place and the liquid ocean where tsunami waves propagate, the majority of earthquakes occurring on a daily basis do not trigger measurable tsunamis. But, some smaller earthquakes could trigger submarine landslides that can result in local tsunamis.

The warning time can be increased—by using acoustic (sound) waves. Acoustic waves that radiate from an earthquake can travel much faster than the triggered tsunami. It can travel longer distances, like thousands of kilometers, carrying information about the earthquake itself as well as the forthcoming tsunami waves. Standard hydrophones (underwater microphones) can record these sound waves long before the tsunami arrives, regardless of the direction of the tsunami. The sound signals come from the changes in pressure .So actually the change in pressure is analyzed is a series of data. After retrieving these data some specific mathematical calculations being done at the centers to analyze the properties such as its location, length, width, time, duration, speed, elevation, and orientation. Using these, not only a tsunami can be warned about but also its size can be analyzed long before it reaches the shoreline accurately.

This gives adequate time for a possible tsunami forecast to be made and warnings to be issued to threatened areas. The speed at which the tsunami waves travel through open water, no system can protect against a very sudden tsunami, where the coast in question is too close to the epicenter, so it’s very important to have an early tsunami warning system in the tsunami prone area.

Algorithms to estimating the potential of tsunami:

After data being retrieved from the seismic networks, the data are analyzed to determine three key parameters for evaluating potential of the tsunami:

This algorithm determines the geographical location and depth of an earthquake source from seismic arrival times. From the network of stations available, automatic horizontal locations are routinely obtained within a few minutes of origin time with accuracy on the order of 30 km. This is very satisfactory to determine tsunami source locations.