Green I.P. Services Pvt. Ltd. offers customized thermal scanning solutions in various industries. Over the years, we have effectively planned, implemented and maintained our systems across India. Learn more about our solutions by contacting us today! 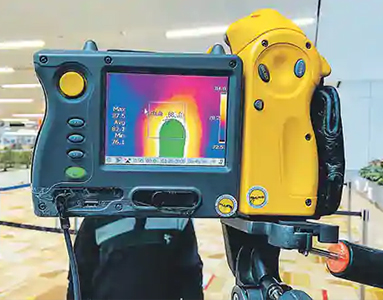 What is a Thermal Body Scanner?

Thermal scanners are used to detect, record and analyze the temperature of the skin surface of a subject or change in the temperature in environment. By showing precise measurements through an accurate heat map of the entire body, a thermal body scanner is a reliable tool for inflammation detection and is incredibly resourceful in the domain of human physiology.

Thermal body scanners are regularly used as a complementary tool with X-rays, MRIs and CT scans. Perhaps the biggest advantage of thermography is that it offers radiation-free imaging, and thus, can be used to scan a subject as many times as possible without the risk of excess radioactive exposure. In Security industry, thermal imaging is used to detect the intrusion in un-maned areas where the thermal sensor can find any difference in temperature and trigger the alarm in case of any intrusion.

Thermal scanners are also a part of Covid 19 solution, thermal sensors are widely used in the Defence, Government, Industries to understand the body temperatures.

How Does a Thermal Body Scanner Work?

Every living body converts carbohydrates, taken as food, into heat energy for optimal operation. For a healthy human adult, the average body temperature ranges from 36.5 to 37.5 °C (97.7–99.5 °F). 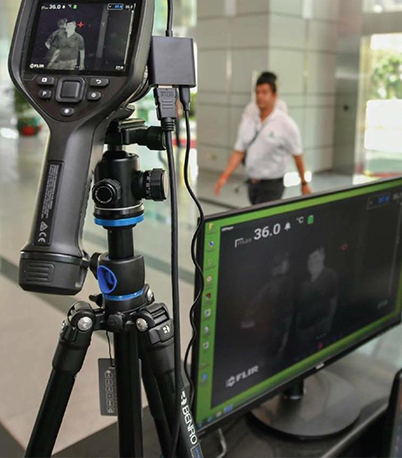 A thermal body scanner uses a special kind of optical lens that can detect these black body radiations. Irrespective of the availability of light, these lenses can effectively focus on these radiations, which are then scanned and processed to produce a thermogram. This thermogram is exactly what the temperature pattern that we obtain on the screen, which is converted into electrical impulses after being imaged by the detector elements in the scanner.

The generated electrical impulses are transferred to the signal processing unit of the scanner, which translates them into data needed to form the images. Depending on the intensity of radiations obtained from the heat-radiating object, different color patterns are processed and converted into the heat map. In general, the more reddish an object appears on the scanner, the more heat it is assumed to be producing. According to the color code obtained, the scanner then processes it in a pre-programmed algorithm to show the exact temperature of the surface.

The utility of thermal scanners goes beyond the general security aspects of threat detection and motion sensing. It is also extremely helpful in detecting movements in dark zones, forest areas, smoke-filled rooms, intrusion detections near to border areas, locating weapons and various other military-grade applications.

Automatic detection and tracking through thermal imagery involve a high-dimensional representation model of a background. This model is adaptive and is allowed to change over time as it comprehends gradual changes in the environment. It is followed by creating a decision line using a hyperplane, which usually matches the object model correctly. Any sample moving outside of the decision line is considered an anomaly. Detection of anomalies works on template-based predict methods that accurately the distinction of background and the object through background subtraction.

Although this technique has its limitations, it is still a very reliable source of detecting border intrusion and enemy detection in the dark.

Thermal sensors can be integrated with the AI enabled video surveillance system and the software using its unique image processing method find out any movement in the activity and change in the temperatures. When the thermal sensors are integrated with the image processing system it can raise an alarm in case of any change in temperatures movement. It can also be connected with the flood lights and when ever there is an intrusion the relay system can directly turn on the security flood lights for surveillance and security.